This page will take a while to load. Please be patient

Here is a photo of the School Choir  sent to me by John Barlow. I'm sorry it is a little too big for the page but it is the only way to see everybody. The full file is approx 6Mb.

If anyone wants the full size version of any Photo on this page then e-mail me at john@ecclesgrammar.co.uk 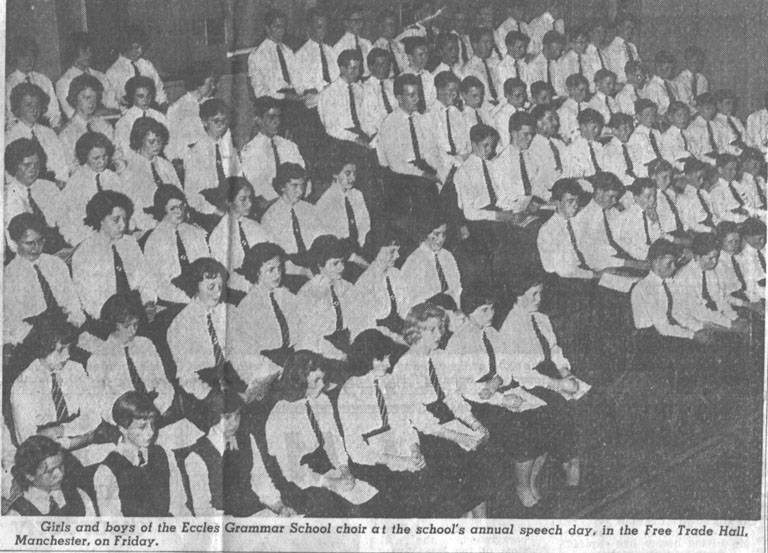 Top cop set to get on his bike!

ONE of Salford's top cops is heading off to pastures new after more than 30 years loyal duty to the force, writes Adam Clark.

The Crescent's Chief Insp Stuart Nelson retires next week and in an exclusive interview with The Advertiser, looked back on his long and distinguished career.

During his years of Service, Chief Insp Nelson has risen through the ranks and seen many changes. Born in Winton and educated at Eccles Grammar School, he joined Lancashire Constabulary Cadets aged 16 and became a constable in Tyldesley.

He came to Salford in 1974 and enjoyed a succession of promotions as well as a stint in the motorcycle unit. He returned in 1983 as sergeant for three years, the 'happiest time' in his career. After becoming inspector in 1986 he moved to Bury, but returned to the Crescent three years ago as Chief Inspector.

Reflecting on his impending retirement Chief Insp Nelson said be had seen many changes and was particularly concerned with the increase of violence on the streets.

"The level of violence and lack of respect for any form of authority, not just the police is a worrying trend," he said. "We all need to work together to stop that decline."

"There are a lot of negative things the police deal with on a day to day basis but there is a lot of work going on behind the scenes to change everybody's quality of life and make things better."

Looking forward to his retirement Chief Insp Nelson revealed he is set to pursue his lifelong obsession with motorbikes and set up his own training school for learners.

We all wish Stuart a happy retirement from the force and best wishes in his new venture. 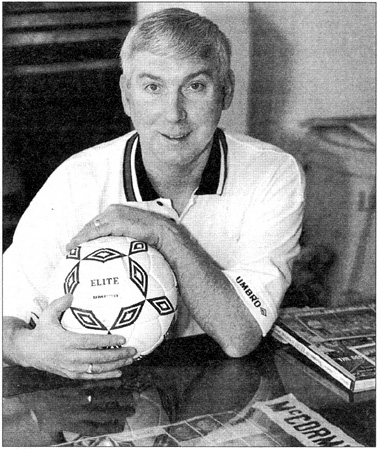 After struggling with growing pains in its inaugural Season the Umbro-86ers Development League is looking to mature in its second campaign.

Created as a summer development league for players in the Under-20 age group, the league featured eight teams representing the assorted soccer regions of the province.

The South Fraser area was represented by the Surrey Athletics, a squad which enjoyed some success in its first year.

Encouraged by the inaugural campaign, team organizers are now preparing for a busy second season where they hope to improve on the ground they broke in year one.

The league came together quickly last season and much of the organizing was done on the fly. Surrey Parks and Rec. came through with a field at Newton Athletic Park for the teams to use and the squad was able to put together a decent season.

After learning on the go and evaluating the results over the autumn, the team has taken steps to improve certain deficiencies in 1999.

The first step was to secure a new playing field for the team at Cloverdale Athletic Park.

"We lived as we went last year because the league was put together very, very quickly." Said team president Geoff McCormick. "This year, we’re quite a bit ahead of the game already. This time last year we didn’t have a field in place but now our field has been dedicated to us."

The Athletics will be playing on the football field at the park and will share the space with the new Surrey United team in the Pacific Coast Soccer League.

McCormick said his club has developed a sound working relationship with the PCSL club and the two groups will be cooperating in a number of ways to help promote the growth of summer soccer in Surrey.

Whenever possible, the two clubs will play doubleheaders at the park with a Development League Game followed by a PCSL contest.

"We look at it as an area affiliation where the players can interchange," McCormick said. "So if we have some good players and they have holes or injuries, etcetera, there can be some player movement. It would work out very well. As far as road trips, it would make them a bit more economical if we piggy-back to their plans.

"As far as media and getting people into the stands, I think it will help tremendously. It will be great exposure for all the young boys to be around that kind of atmosphere. If we could get five or six hundred in for the first game maybe they’ll stay around and we’ll see crowds of 1,000 in for the second game."

Although the Athletics will be working with Surrey United in a number of ways, McCormick stressed the U-20 team is not a division of the older club.

The Athletics were formed as a regional team to draw from all of the clubs in the area and McCormick believes there will be a more equitable representation of the local clubs on the 1999 team.

"We have a very good rapport with Delta and that seems to be coming closer as time goes on," he said. "Delta wants to support the program because they do have a program for summer in Delta. Last year, because of the speed in which it was put together, the team was made up of a large number of Surrey Youth Soccer (players). This year we see more of a parity from all clubs, Surrey United, Peace Arch, Surrey Youth, Whalley, Guilford and maybe the fringes of Langley or for that matter any boy who wants to try out."

The league will be playing a shorter season in 1999, confining games to the months of May, June and July.

The Surrey Athletics will be holding tryouts in the near future. For more information contact McCormick at 535-9663.

Geoff was in the 1958 intake at Eccles

Sorry to be so long in acknowledging recent messages - and thanks to Shirley who has fended the flak on my behalf!

I was unable to attend the EGS reunion 1998 but was able to see something of the event, courtesy of the Savage website.

Since leaving the BBC after 22 years in 1986 I have tried to concentrate on composition exclusively, but failed - I had 2 days free in 1986 before accepting a plea for help from the Northern Chamber Orchestra with whom I worked as Artistic Director for 7 years. Happily things seemed to work well and they now have a considerable list of CD recordings worldwide in the Naxos catalogue.

During that time I was also advising on the setting-up of a new symphony orchestra for Portugal (Orquestra Sinfonica Portuguesa), commuting between Manchester and Lisbon, until I had to choose! Eventually the sunshine on the Costa Estoril won and I moved there for a time, working mainly in the wonderful opera house in Lisbon (18th Century splendour) or in the concert-hall in Belem (brand new).

Meanwhile, I was losing touch with the real world and writing very little, so it was time to return home where I managed to do some freelance commercial recordings plus a little teaching. Now I'm concentrating on establishing my catalogue of compositions - just recently I have been involved with a CD of my own music, plus another which includes something of mine plus works by other North West-based UK composers. On 7th April BBC Radio 3 broadcasts my 2nd String Quartet and quite soon (?) the BBC Philharmonic will premiere my Symphony No.2.

Maybe some of the EGS former pupils might be interested to buy copies of the Ellis CD? It was issued by 30 April 1999 on ASC Records whose e-mail address is:

They will provide further information and take orders before it goes to the retailers - i.e.at a discount price!!

That's the end of the advert.

Shirley will continue to look after me in my old age until her patience evaporates.

If anyone else intercepts this message who may remember me from EGS days, all good wishes. David 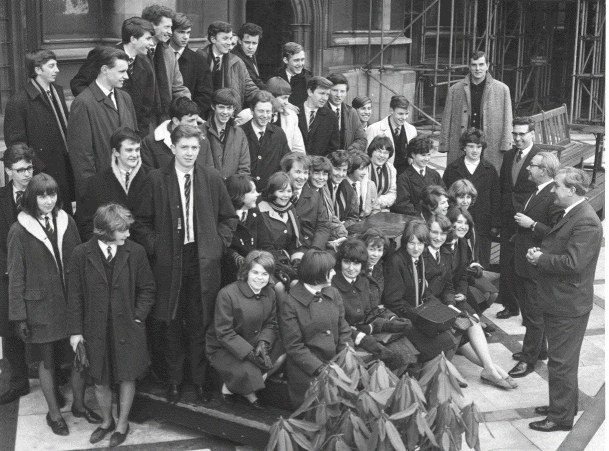 I went on this trip. Is that me between Keith Dixon and Malcolm Pearce at the back?

Photo taken in 1964 sent to me by Phil Williams 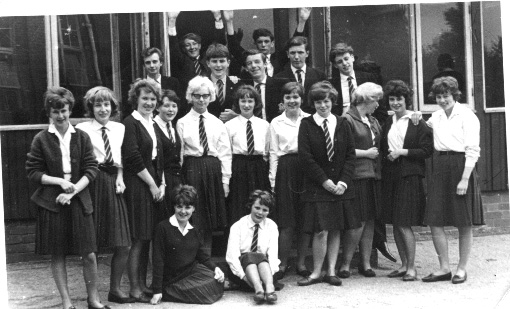 Back row (with arms in air): Dave Paisey, Ian Cordwell